Our educational video on DVD

That’s why we’ve spent many years working on this film based on Louis’ training, because the current evolution of horse’s teeth treatment has overtaken us several times during production. And again and again someone of the authors came in, which essence might more important and had to be recorded new or differently. That’s why the recordings took place in Canada and Germany, often mixed in English and German. First appeared the German synchronized version, it remained unfortunately.
But it has become a work that contains concentrated knowledge about the “System Pequin”. Because we focused on the target groups: horse owners and horse fans, we had to pay attention to a generally understandable presentation of the substance with a good intelligible reception by the audience during a one-time demonstration. On the other hand, professionals and veterinarians should not be barked up and so this view had to be consistent, too.
We have been offering the film since 2008 until May 2018 on the web and there is only a private contingent remaining, available to the authors Louis Pequin and Rolf Böhling. If you are interested, you are welcome to contact them for questions regarding price and availability via the contact form.

“Today we observe that many people are interested in the topic, unfortunately they can not concentrate on information processes and films that take more than three tube minutes. With this timing, it would have been quite impossible for us to explain our concerns and that of the horses. So we were led to make a really detailed and entertaining film that recreational riders can use as well as professionals, if they were willing to accept our request”.

“We thank all our customers so very much, but in the mind of most of the other horse owners still prevails the view: As a horse owner, you would not need to worry about such an animal welfare, that also includes a gentle, professional horse teeth treatment. So you pass the problem easily into the hands of any dubious dentists or so-called experts – although you do not know their qualifications from your own point of view.
Just imagine you were never informed in which points a gentle and sustainable horse teeth treatment differs from an unsuitable, then you could think you have solved the problem in the easy way. This mistake could be expensive, especially if follow-up problems arise some time after a bad treatment.”

“Regularly, after several years of revival, this issue keeps coming to rest, as there has been no lobbying for horses with dental and other pain, and those higher-level institutions that are actually responsible for monitoring qualified activities and regular dental checks as part of animal welfare were still caught by any ideas of the day before yesterday, in which they have settled comfortably.”

The trailer below is only a foretaste of the “big movie”.
I wish you always good chewing! 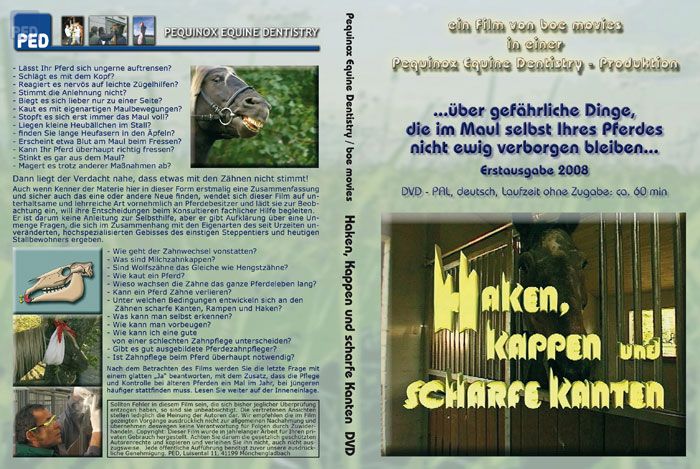 Die Bildauflösung des Videos (mp4 oder unten webm) beträgt hier 640x480px. Beim Anklicken bleiben Sie auf dieser Website und es werden keine Werkzeuge eingesetzt, die Ihr Nutzerverhalten ausspähen.
The resolution of this video-preview is reduced to 640px * 480px. The upper window is mp4, the lower one is webm. After your click you will remain on this pages. There will be no trackings or recordings of your user pattern.